Last weekend was a busy one with five runners over Friday, Saturday & Sunday.

Friday saw the talented Deauville Dancer make his seasonal reappearance at Exeter where he put up another gallant performance to finish 2nd in the Coreus Group Property Consultants Handicap Chase, staying on all the way to the line under a bold ride from young conditional Ben Jones. This was a very pleasing performance from Deauville Dancer having his first run of the season & giving 9lb to the winner & seeing the trip out easily all the way along the uphill Exeter run-in for owners Mr G. Brandrick & Partner.

Saturday was the turn of both Nighboattoclyro & racecourse debutant Hardy Articos who headed to Chepstow where the ground was testing to say the least.

Going off at a whopping 50-1 it was Nightboattoclyro who landed the spoils, taking the UHY Hacker Young Novices’ Hurdle under jockey Jack Tudor. Nightboattoclyro was having just his second start over hurdles having been brought down on his debut at Taunton just a month earlier when travelling well at the time & we were thrilled to land a first victory with this exciting young horse & his owners Glastonburys & On The Gallops 1.

It was in the final race of the day, the bumper, where Hardy Articos made his racecourse debut & he made a very pleasing start to his career finishing 6th. Hardy Articos, under jockey Lee Edwards traveled well early in the race before being a little caught out by the speedier types in the race turning in but stuck to his task well staying on all the way up the tough Chepstow straight for owners D D Racing 3. This was a very encouraging debut from a large framed young horse & we are excited now to see what the future holds for him.

Above – Hardy Articos at home – an exciting NH prospect

Veiled Secret was another who finished in the frame this weekend when finishing 3rd in the Fitzdares Cerebral Gym Conditional Jockeys’ Handicap Hurdle under Richard Patrick for owners Clan McNeil. Proving himself to be a most consistent individual, this was Veiled Secret’s fifth time in the first three home this year & he is sure to find winning opportunities once again for his owners this season. 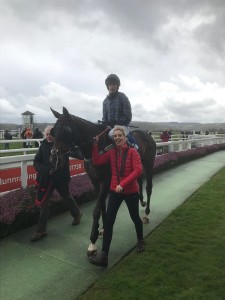 Above – Veiled Secret winning at Taunton in April 2019