Indy Five Makes All At Doncaster 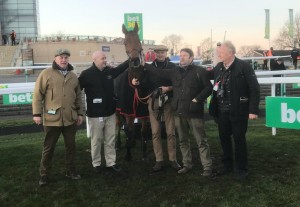 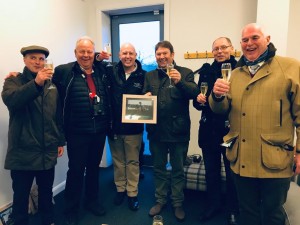 Indy Five in the Winners Enclosure at Doncaster with his delighted Owners, The Dobbin Club, which include from left to right David Doolittle, Pete Mulligan, Geoffrey Fairfoull (leading up Indy) Mark Burgess and Andy Chater
On Friday, Indy Five returned to the winners enclosure for the first time since February 2018 which was a great result for his enthusiastic owners, The Dobbin Club.  It’s been a long time between drinks, especially for them!  Ridden by the recently turned Conditional jockey, Jack Andrews, who completed a treble on the day, Indy got into an even rhythm and made every yard of the running putting up a display of jumping which was pretty much faultless and won by an eased down five lengths.  The Read Kevin Blake On atheraces.com Conditional Jockeys’ Veterans’ Handicap Chase (Series Qualifier) ensures Indy could potentially have the chance to line up for the final at Newbury on 2nd April 2022 which is a £40,000 prize and is run on a racecourse where he’s run very well at in the past.  These races are a great series for veteran horses such as Indy.
The horses have all been running extremely well in recent weeks, in particular, Innisfree Lad who ran a blinder, finishing 3rd, in the Scottish Borders National at Kelso last weekend on ground that was softer than he’d prefer.  Let’s hope their form continues especially during the festive period!
Back to news feed