What a week for DD Racing with all of our runners getting in the placings which was great for everyone involved.  Last weekend Innisfree Lad set the ball rolling, making the long journey north to Newcastle, where he ran in the Eider Chase which was an extremely competitive renewal for the £80,000 staying prize.  Ridden competently by leading Conditional Jockey, Theo Gillard, Innisfree Lad jumped soundly and travelled with enthusiasm.  He finished 3rd only beaten 8 lengths behind Wing My Wings collecting over £9,000 in prize money for his owners, Lorna Hardwick and Bob Allum.  Lorna was on hand to watch Innisfree Lad in action – fair play to her it’s not exactly a five-minute journey from Eldersfield in Gloucestershire!

We then sent Anuas Ar an Bpost to Wincanton on Wednesday to run in his second ever chase.  He jumped soundly under Conditional Jockey Charlie Todd and ended up finishing a promising 3rd on ground that was far too soft for him.  This was an encouraging result for his syndicate of owners who are in DD Racing 3 and they can all look forward to some fun when the ground improves in the spring and summer.

Merry Mistress was unlucky at Market Rasen on the 22nd February where she was only beaten a head by the in-form Desaray Girl.  She was raised 2lb for that run and had the opportunity to run off her original mark of 102 on Friday at Doncaster in a Mares 0-130 2 Mile H’cap Hurdle.  Ridden by Charlie Todd, on rain softened ground, she jumped and travelled nicely; Merry Mistress took up the running after the second last hurdle and won by a ridden out 2 lengths.  This was a tidy performance considering the ground was softer than ideal for her.  Merry Mistress’s owners, Graham and Margaret Saville, were on hand to watch her and Sky Sports Racing viewers witnessed Graham getting rather excited when she was powering up the run in on Town Moor!

On Saturday, Indy Five ran in Leg 3 of The Veterans’ Chase Series at Newbury, which was broadcast on live ITV Racing.  Indy Five rolled back the years at the grand age of 12 making all in the running, both jumping and travelling easily under the in-form Jockey, Stan Sheppard.  They set a good pace throughout the 3m1f race and quickened up 4 fences from home, winning by a comfortable 9 lengths and collecting over £15,000 in winning prize money.  This was a great result for owners, The Dobbin Club, who were partly on hand to see Indy put up such an impressive performance, which was exciting for all of them.  Indy five has already qualified for the Conditional Jockeys’ Veterans’ Chase Final, to be run at Newbury on 2nd April, which is where he is likely to head next.

Whilst we are all delighted and enjoying good results for the yard, it is important that we spare a thought for the Ukrainian people in these horrific times for them. 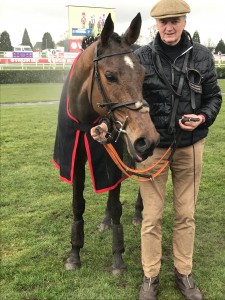 Merry Mistress after her victory at Doncaster with Geoff Fairfoull. 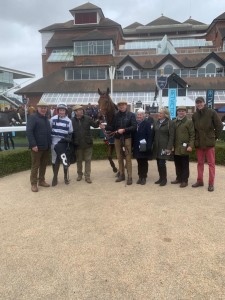 Indy Five in the Winners enclosure at Newbury with winning connections.