David Brushes Off His Boots For Greatwood Charity Raceday

David had been riding outÂ four lots per day in the run up to the event in addition to jogging and a degree of dieting in order to be in tip-top condition for the 1m4f race that lay ahead.

David’s ride of choice was Lucky Jim, owned by Professor L P Hardwick & Partner 2, for whom it was the ideal prep for the season ahead after a layoff that has not seen him on the track since last September. A winner already on the flat over 1m4f back in 2014 and also a winner of a hurdle as well as many placed efforts over both hurdles and fences made Lucky Jim the ideal candidate in such a race as this.

David & Lucky Jim were handy throughout the race and lead turning into the home straight only to be caught in the final two furlongs and beaten into 3rd place on ground a lot softer than ideal for Lucky Jim and it was a fantastic effort by both horse & jockey.

It wasÂ great for David to receive so much support both on the run up to and on the day of the race with family, friends and owners all there to cheer the pair on. David was particularly thrilled to have been so generously sponsored and was delighted to have raised nearly Â£4,000 for such a worthy cause as the Greatwood charity who do such a wonderful job from their base inÂ Wiltshire where they are the only organisation that uses ex-racehorses to educate disadvantaged children and young adults with special educational needs. 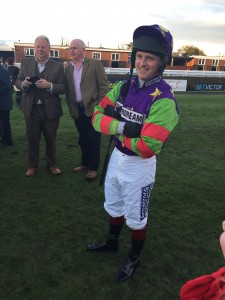 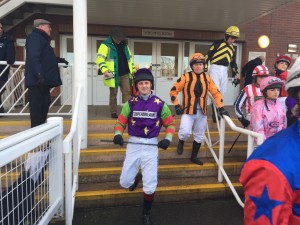